I'm going to tell you a story. The story of 2 days ago.

Once upon a sleepless night, a young urban lady was wondering around her apartment, doing what 2.0 young girls do on a cold saturday night that was not chosen to be a party night: dance alone on her favorite 90s RnB jams in her bedroom, in compfty yet sexy clothes. And as we all do way too much ADD generation that we are, she went on Instagram for no reason.
I was feeling good, happy and in the moment. I felt pretty and Real. So i did something that i had no idea would cause so much "feedback": i posted a picture of myself in that moment. Dark, unfocused and with very little details, i felt the picture looked good and somewhat artistic. True to that moment and how i felt without revealing that much.

What happened next was a little overwhelming.
I first got a few messages that made me feel like a slut. So i erased it.
And a second later, i felt so dumb erasing something i felt was not deserving of that kind of judgement, i put it back up and went to sleep, thinking i did the right thing not falling for the mean words and keeping my ground as i had done nothing worth judging.

I felt completely overwhelmed and judged and so i erased it AGAIN.

Now most texts were not mean at all, mostly guys i barely speak to at all usually, being like: "about that scandalous picture"" yo that picture.." "or " omg was that you?" or even " i heard of a picture and i really wanted to see it"…
I was starting to wonder why this freakin' pic had so much impact, knowing and seeing what some girls (some i know) post all the time. I didn't feel it was far from who i am, far from my image.

I like to think that i am a free minded and open about her body and sexuality kinda girl so it started to really bother me that i had let this bug me so much. (I know, i sometimes think too much )

Thing is, it seemed to me that most people took it the wrong way, and by people, i mean boys.
They seemed to think, as they usually do, that when a girl posts a sexy pic, it it necessarily FOR them. To get THEIR attention.
NO.
My men listen up: when a girl dresses sexy, or wears lipstick, or wears heels: it is NOT necessarily for you at all. Some girls, yes. But me, and most of the chicks i know: NO.

WE DO IT FOR OURSELVES. I buy and wear sexy underwear for ME. I dress sexy for ME. I post sexy mood picture on Instagram for ME.
I like and need to find myself pretty and sexy. It's part of how we live, how we grow.
If that picture was for you: i would have send it to you directly, and with others, trust me, i do that if i like a guy.

I remember this TV show i few years back where this couple was having a crisis: she wanted a breast augmentation and he din't want her to, saying she didn't need it as he thought she looked just fine for his taste. He was really upset as he kept saying she was a slut because she was OBVIOUSLY doing it to get the other men's attention.
All the ladies in the audience, including me where so upset at this stupid way of seeing this situation. The girl was hopelessly trying to explain that she didn't care about the other men's attention, she needed to do it for herself, to feel prettier and more feminine. He never got it.
It's a girl thing i guess as i know for a fact that most guys really don't understand this.

To get back to the story. What i did next, to get over this situation was a little out of the ordinary. I wanted to repair this. I felt i did nothing wrong but by taking the picture down, i felt i had acted like i did something wrong. like i was ashamed of it. And i am NOT.
I took a marker and started writing words and meanings all over my body. From neck to toes.
It felt beautiful. Healing.
I took a picture and posted it.
I felt better. Like i re-owned my half naked body and was proudly showing the "instagram world".

Maybe this whole thing really just happened in my head. But whatever, it did happen for me.

And now i will post the so called "scandalous" picture here. Because there is nothing wrong with it in my eyes. 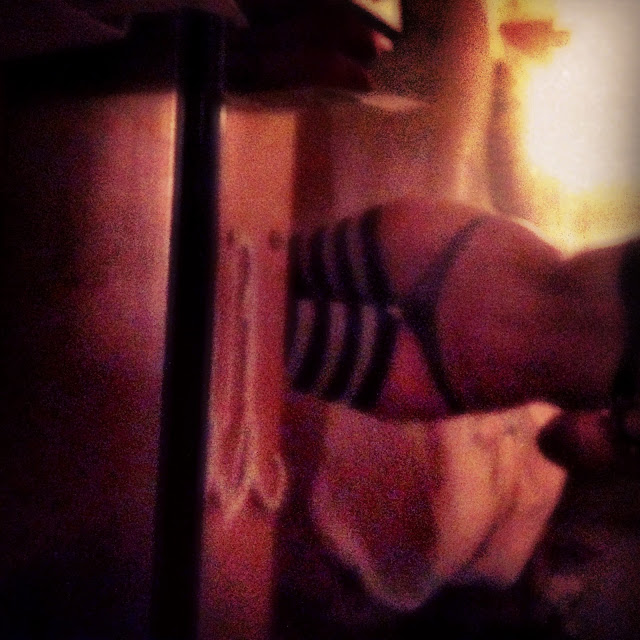