JESUS ISN'T A DICK SO KEEP HIM OUT OF MY VAGINA.

A little bit of faith put back in Texas.And to Tuesday Cain,
Young lady, you are more of a woman than some women. 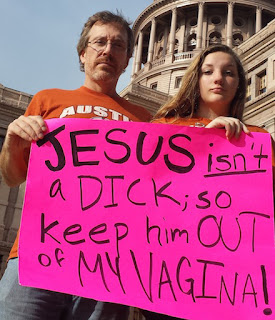 I'm a 14-year-old girl who has lived in Austin, Texas, my whole life. I like art, music and talking on the phone with my friends. When I grow up, I'd like to become a science teacher.

I also believe in the right to choose and the separation of church and state. Or to put it another way -- to put it the way I wrote it when I was protesting at the Capitol last week:

"Jesus isn't a dick so keep him out of my vagina."

Yes, that's my sign.
I came up with it last week when my friend and I were trying to think of ideas for what would get people's attention to protest the scary restrictions that are happening in my state trying to take away a woman's right to safe and accessible abortions.

When my friend and I took turns holding the sign, one of the pictures of her went viral.
Then my dad went online to defend the sign on Twitter and other online forums.
That's when people started calling me a "whore."

I'm going to be honest about what it feels like to be called that as a 14-year-old girl who has never had sex and who doesn't plan to have sex anytime soon.

It's not anyone's business, but as I said, I am a virgin, and I don't plan to have sex until I am an adult.But none of those facts make me feel any less passionate about fighting for a woman's right to choose and the separation of church and state in my home state of Texas.

I know someone who has had a few abortions. She now says that abortion is bad and she fights against a woman's right to choose.

This makes it all the more important for me to protest, even if I am only 14. In fact, my dad woke me up so that I could watch the Wendy Davis filibuster the night that she tried to prevent this legislation from passing the first time. I remember thinking that I was proud to be from Texas watching her stand up for what is right.

That was when I told my parents that I wanted to join in the protests. I have seen anti-abortion protesters at a clinic near our house, and it makes me upset to see women who are facing this hard decision being told that Jesus condemns them.

I guess I don't think it seems very Christian to me.
Then again, neither does calling a 14-year-old girl a whore.

The first day that we were out protesting at the Capitol, my friend and I took turns holding up the sign I wrote, and an older man came up to us yelling right in our faces. "You two should shave your heads! You should become lesbians! No man will ever want you! You're ugly!"
The police had to ask him to stop yelling at us. It was scary. But more than scaring me, what it did was make me feel even more determined to stand up and protest even louder.

I read some of the comments online that people said about me, and I was so proud of my dad for sticking up for me and for the sign I wrote. After a certain point, I really couldn't believe some of the comments people were writing. One person said that my parents should be arrested for child abuse and in another unbelievable comment, someone suggested that my dad must invite all my friends over to "play abortion clinic."

I'm done feeling disappointed by these attacks. That is why I'm speaking out -- even if I am only 14 years old.

But the way things are playing out everything feels reversed. Adults are not acting like adults.Normally, I prefer to look up to adults as role models. But what is happening in Texas right now it's hard to find adults who I want to look up to.